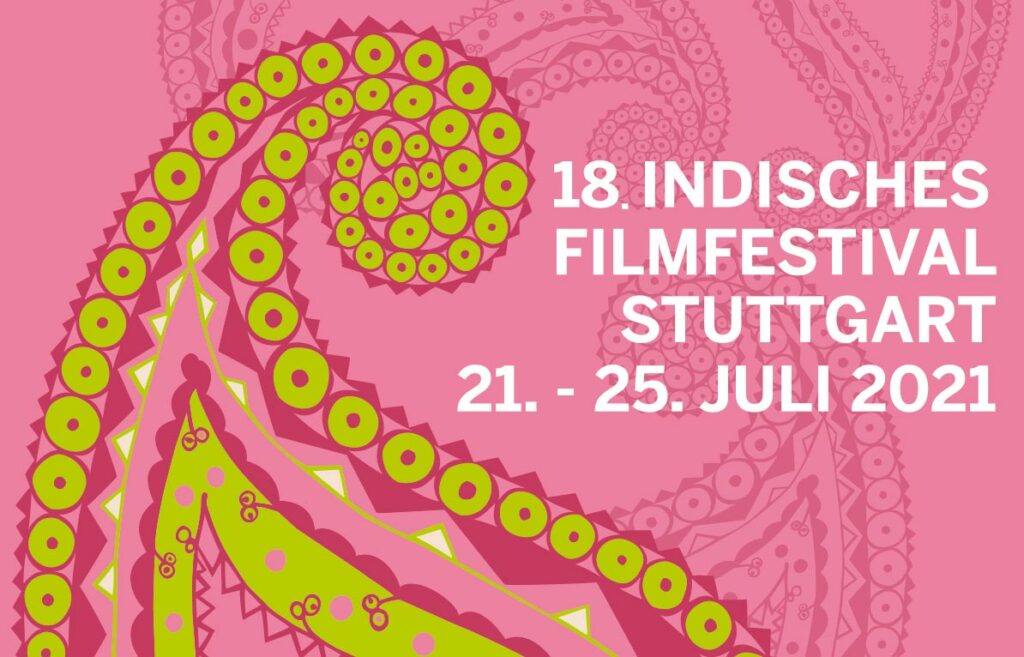 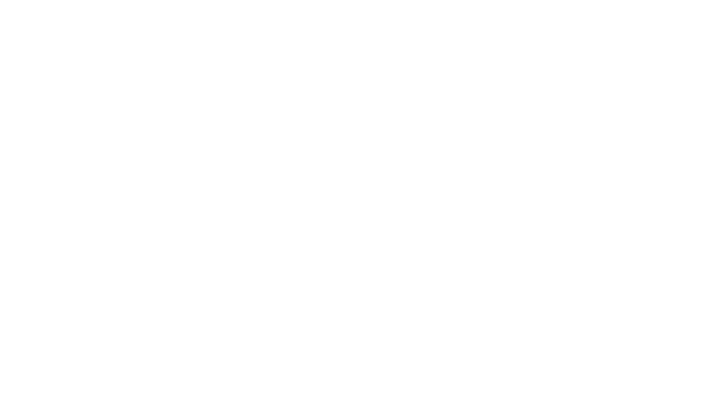 As part of the opening ceremony of the 16th Indian Film Festival Stuttgart,  Shubhada Manohar Varadkar will present the classical Odissi dance. Shubhada Varadkar’s individuality, versatility and sensibility grew under the guidance of her guru Padmavibhushan Shri Kelucharan Mohapatra. Shubhada shares her strong bond with Bharata Natyam, but Odissi still is her first love and reason to exist. Being praised as prima dona of Odissi by critics, Shubhadas dance emphasizes the true spirit of Odissi as the dance of love and passion in its purity. Her deep engagement for this form of dance brought her awards such as Sringar Mani, Priyadarshini, Maharashtra Gourav, Mahari Award, Kala-Ratna-Preis, just to name a few, and a Senior Fellowship by the Indian ministry of culture. Shubhada, a national artist for Doordarshan, is also an artist of the Indian Council for Cultural Relations (ICCR). For this performance, Shubhada will be supported by Mitali Shekhar Varadkar and Shreya Sabharwal. 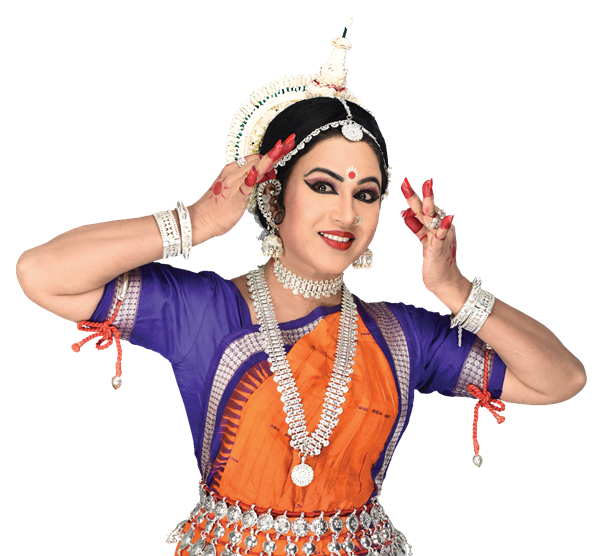 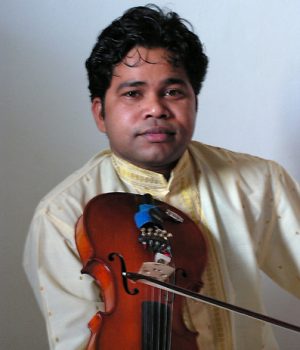 Manoj Baruah from Assam, India belongs to the rare violin players of the classical Hindoostani from Northern India. He plays a 5-stringed violin. His performance showcases an excellent technical execution. His music is infused with a highly emotional unfolding of the auditive experience. His performance will be supported by  Souvik Datta, who studied Percussion Music at the Rabindra Bharati University in Kolkata. Since then, he has been working as a professional percussionist in India and abroad with musicians from different genres.

The 3raddisko will guarentee good vibes on the red carpet. It’s a mobile party concept, including a 3 horsepower motor, a 300W Surround-Sound-System, LED & Laser light effects, fog, soap bubbles und a video projector. Come on over and let yourself get carried away by the good music. Dancing on the red carpet is not only allowed, but explicitely encouraged! 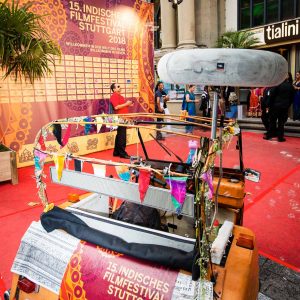 As part of our big raffle action on the red carpet, you have the chance to enjoy a diverse show with excellent dancers and musicians from various different genres. 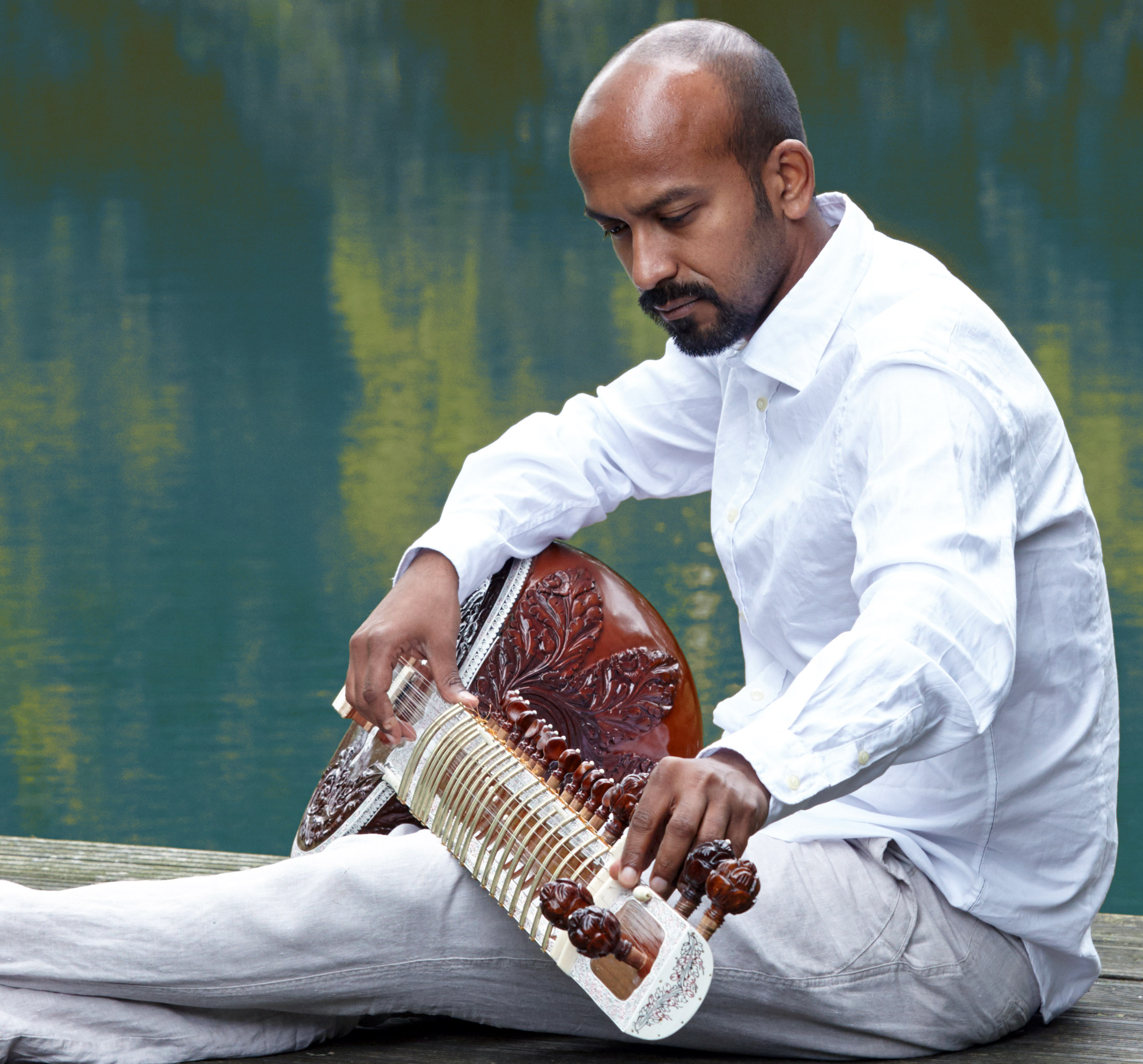 Hindol Deb, sitarist and composer, has been exploring the infinite combinations in the Crossover of Indian music with various other genres like Contemporary Western Classical, Jazz, Flamenco, Nordic folk music performing at various Festivals and Venues. Hindol was invited by the Academy of Carnegie Hall, French Ministry of Culture and ETHNO Sweden as resident artist to work with the musicians there. He also had the honor and privilege to be invited to perform for the Pope Francis, the Dalai Lama. He has worked worked with Marina Abrahmovic, Markus Stockhausen, Sebastian Gramss, Uma Dogra to name a few.
Hindol is involved with several projects like his Indian Classical, Eternal Voyage,-World music, Medieval Raga – Indian & medieval music, Sitar and Metamorphosis – Crossover Jazz. As a teacher and educator Hindol gives lessons and workshops on Indian classical music, interpretation of Indian music in Western musical context. Currently Hindol teaches Indian music at Popakademie in Mannheim.

Not just one, but two groups from Maharashtra Mandal Stuttgart e.V. will be performing at our raffle action:

Sawani, Jiya and Neeshka are thirteen years old and have a passion for dance. They are learning and performing Kathak now for six years. This year they appeared for Kathak examination certificate level 1 from „Bharatee Vidyapeeth‘s International University for dance and Music“. Since two years they are being trained under the able guidance of Tejaswini Sathe, co-director of „Shambhawi‘s International School for Kathak SISK“. For this performance, they are happy to present a SARAGAM in Raag Des choreographed by Tejaswini Sathe. They will be accompanied by Sharwari Kulkarni-Dhotarkar.

The three kids Pranjal, Akshar and Keya are very enthusiastic and enjoy dance. Keya has learnt Bollywood style from the Shiamak Davar Institute of Performing Arts. Akshar is learning Bollywood dance here in Stuttgart. For this performance, they are presenting a very traditional dance with their mothers (Prachi and Manisha). The dance is from the Indian state of Maharashtra invoking the blessings of Lord Vitthal (incarnation of Lord Vishnu – The caretaker). Their attire is also traditional like the “Warkaris”.

Additionally, there will be a performance from eight dancers: Prachi, Manisha, Sonali, Amruta, Ujwala, Jaee, Vaishali, and Neelam will present a traditional Maharashtrian dance with the musical instrument Lezim. It is a group dance performed to Praise Lord Ganesha. 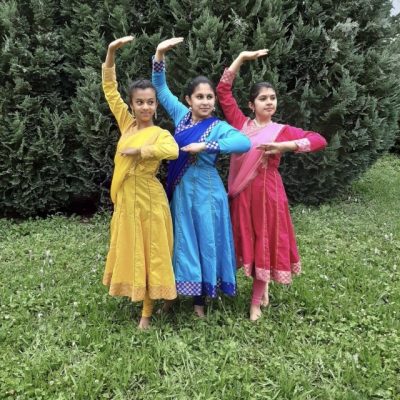 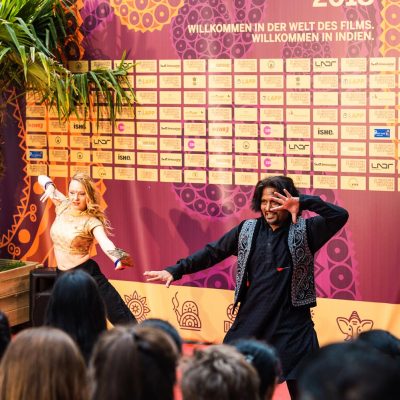 In the year 2006, after more than 20 years in the show business, Derrick Linco, alias Mr. Bollywood, founded the nationally well-known Bombay Dance Club where Bollywood Fans find everthing that their heart desires. Bombay Dance Club is a leading club in Germany regarding Bollywood dance shows, events, dance parties and as a latest addition Bollywood special makeovers. Under the motto “Dance like a Bollywood star”, the club regularly hosts dance courses in the Stuttgart area and dance workshops throughout Germany. There is also a dance workshop happening as part of the 16th Indian Film Festival. In the past years, the Bollywood Dance Club team has worked together with well-known celebrities both from Germany and India, such as wie Kaya Yanar, Loona, Shiamak Davar, Saroj Khan, Punjabi MC, and Ash King.

DJ Linco is one of the most popular Indian DJs and the winner of the “Carneval of Cultures” in Berlin 2019. He will bring the Indian Lounge Bollywood flair to the Red Carpet, including Bollywood Charts / Chillout / Indian Remixes / House and traditional Indian “Desi” music. Feel free to come, chill and dance till open end.

As part of the tea matinee, we are happy to announce a very special performance. Debasish Ganguly grew up in the musical environment of his late father Dhana Gopal Ganguly, flautist and composer. He took his training and guidance from many masters. He earned his MA in Instrumental Music from Rabindra Bharati University. He also won prestigious awards like Suro Mani in Mumbai. He also composed Music in various films like “Guru” directed by Tamas Toth and also in the most admired film “Island” directed by Paul Cox in Australia. And also performed in various European Channels like French/ German TV channel, Arte as well as in India (Kolkata DD Bangla). He travels every year for playing concerts and conducting workshops in India and abroad. He has been interested in and has been inspired to participate, create and collaborate in fusion music between classical as well as folk music and fusion with jazz groups also. 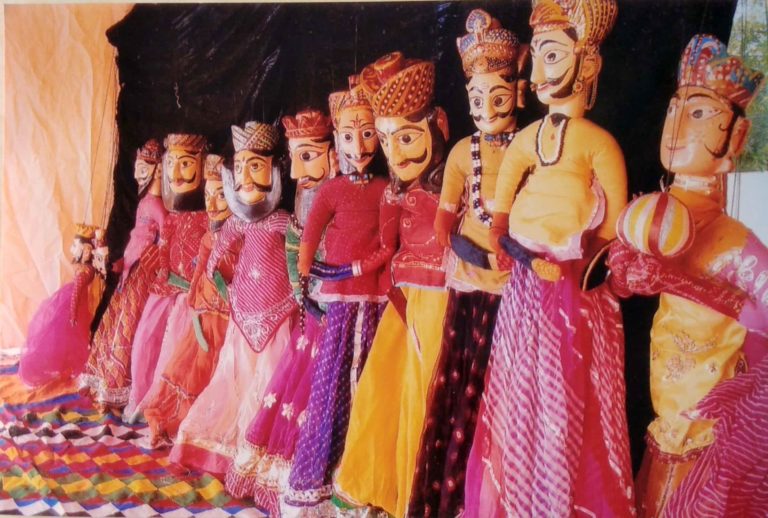 As an opening act for the family film “Chippa”, there will be a performance of the Kathputli puppet theatre. India has an over 2000-year history of puppetry with many different developments and illustrations in different regions and states. The puppet theater amazes children and adults at the same time. The puppet theater’s repertoire includes plays of Rajasthan folk art and stories of the great Indian epics of Ramayana, Mahabharata, and the love drama of Laila & Majnun. The puppet show is almost without language. There are many artistic figures showing amazing tricks.

Deepika Panchamukhi and Shruti Abhishek are both professional Bharatanatyam dancers from Mumbai, India. Over 20 years, they have gained vast experience learning from and performing under well-known exponents of dance. At Nalanda Dance Research Center (Mumbai), they earned their bachelor’s Degree of Performing Arts under the tutelage of Guru Smt Kanak Rele, a Padma Bhushan awardee by the President of India. Currently training under Vaibhav Arekar in Mumbai, they have performed in prestigious festivals in India and Europe. They have the experience of working together as core dancers at Sankhya Dance Company, Mumbai. And this is where they enjoyed and explored their chemistry. Deepika and Shruti make this challenging feat of creating works across borders and live their dream to reality. 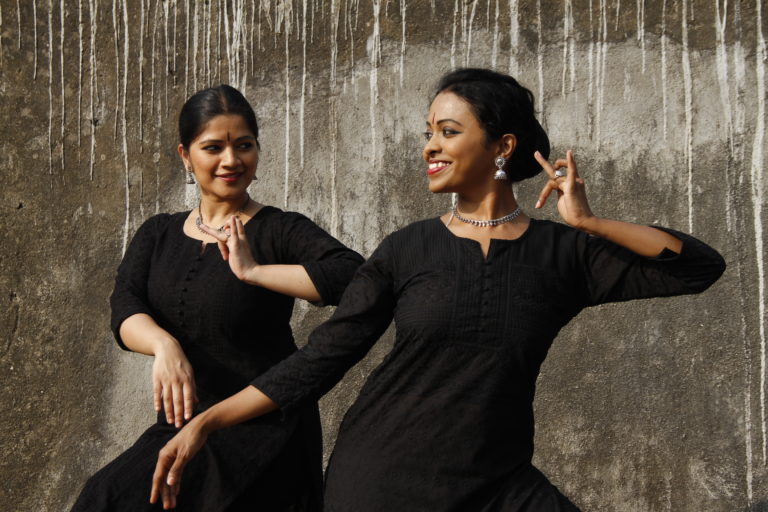 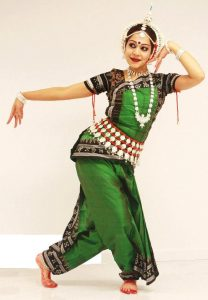 Anindita Nanda will be performing as part of the award ceremony of the 16th Indian Film Festival Stuttgart. She is an exponent of Odissi and intensively trained under the lineage of the legendary Guru Kelucharan Mohapatra, in India. She is an internationally acclaimed classical dancer and also an Indian classical vocalist. She has a Masters in Indian Classical Danceand Vocal Music and is the recipient of several titles in India like Nritya Shree, Nritya Siromani, Nritya Praveen, high honors for dancers in India. For over 15 years she has been working to promote the dance through concerts, workshops, and lecture-demonstrations. She is the founder and director of SoorTaal, which was created for the promotion and preservation of Odissi Classical Dance. She is also on the board of the World Heritage Cultural Centerand continues to contribute through her work in preserving and promoting World cultures. She lives and teaches in Connecticut, USA. She is a scientist when she is not dancing.