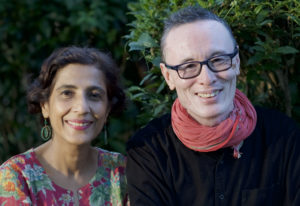 Ritu Sarin was born in New Delhi. After graduating from Miranda House, Delhi University, she obtained an MFA from the California College of Arts.

Tenzing Sonam was born in Darjeeling in northeastern India to Tibetan refugee parents. He graduated from St. Stephen’s College, Delhi University and then studied broadcast journalism at the University of California, Berkeley’s Graduate School of Journalism.

They have made more than 20 documentaries, several video installations, and one dramatic feature. Their work has primarily focused on the subject of Tibet and attempted to document, question and reflect on the issues of exile, identity, culture, and politics that confront the Tibetan people.