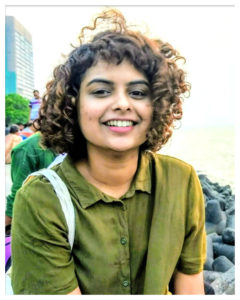 Sumi Mathai is a Mumbai-based writer and director. She began her career in advertising as a copywriter and gradually inched her way into filmmaking. Her debut short film ‘Detour’ won her a Special Jury Mention at the prestigious Mumbai Film Festival in 2017. She is currently working on a web series that she classifies as an ‘adulthood comedy’. She also finished her first feature film script.