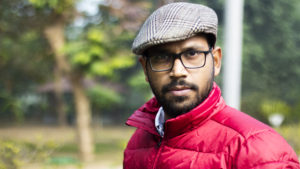 Born and brought up in Delhi, Anuj Bansal has graduated in electronics and communication engineering, but always found filmmaking to be his love and passion. He attended several filmmaking workshops during his college days. Having completed his studies, he joined NWC Productions, Delhi as an associate director for non-fiction shows.
Like most of the “filmy freaks” of India, he landed in Mumbai to see himself working for the film and TV industry. Having spent all his savings and disappointed about not getting the job in the industry he wanted, he returned to his hometown. He made a documentary called ‘Selfless Devotion’ which was selected to screen at the International Digital Film Festival. The Film and Television Institute of India (FTII) gave him the opportunity to join a multi-camera production course which brought him back to Mumbai. He worked for Optimystix Entertainment Pvt. Ltd as an Associate Creative Head and later as an associate screenplay writer for Balaji Telefilms. ‘Destiny’s two’ is his first own short film project.