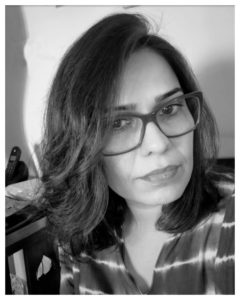 Anisa Mukerjea Ganguli is a writer, director and producer of films. Her first job after graduating from Concordia College, Westchester, New York with a Bachelor of Arts in English Literature was as a copywriter for an advertising agency in her home town of Kolkata, India. She then moved to Mumbai to work in television with Channel V networks. She has also worked for Off Road Reports, Switzerland, as a producer on a documentary about the Dabbawalas of Mumbai. She has assisted renowned filmmakers in India such as Goutam Ghose on the film ‘Abar Aranye’, and has written the screenplays for and assisted on award-winning films such as ‘The Truck of Dreams’. Anisa now pursues writing and directing her own films and has completed a documentary called ‘East Bengal Didi’. She has just released her first short film, ‘Kivaad’.