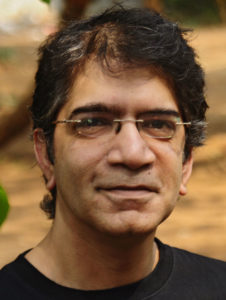 Gaurav Bakshi is an economics graduate from Delhi University and an MBA from IIM Bangalore. After 15 years in the corporate world as a marketing man, he switched tracks to follow his passion for film making. To familiarize himself with the grammar of the cinematic medium, he did a short course in direction and film making at The Tisch School at New York University.
Once back in India, he gained on the job experience by working as an assistant director. Occasionally consulting for various production houses and writing columns, he is now developing his own projects, both short and feature length. His short films have been showcased at various film festivals. ‘#Gadhvi’ is his first feature film.