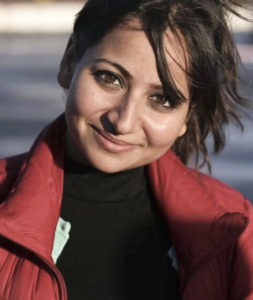 Shazia Iqbal has been working as a production designer in the Indian film and advertising Industry for twelve years. An architecture graduate, she left a sheltered office job after having been enticed by the idea of telling stories and studied ‘Directing for Films’ at MET film school, Ealing studios, London.
She designed Anurag Kashyap’s film ‘Mukkabaaz’ and is the lead production designer for India’s first original Netflix series ‘Sacred Games’. Her feature script ‘Chaplin’ was selected at the NFDC Director’s Lab, Mumbai Mantra Screenwriter’s Lab.
‘Bebaak’ is her debut short film and has won the Audience Choice Award for Best Short at the Indian Film Festival of Los Angeles. The film was inspired by a true event that moulded her religious, social, and political ideology while growing up.